A new year and a fresh start!

First off, Happy New Year. My first post of 2011 and good luck to all those anglers reading this, hope you can achieve your 2011 goal.
For me my goal is still the 20lb river Dee Pike, but I think I’m going to change the rules a little here and rather than say a 20lb river Dee Pike, I’m setting my sights on a 20lb Pike from anywhere!! Hoping to achieve this before March so I can concentrate on the mere ready for spring and the tench. Got a few Pike waters I want to have a look at that have recently turned up on my radar and with the Dee at the moment being so unreliable I’d be stupid not to spread my wings a little.

So unlike most people I have been out and about fishing. First trip of the new year was a spot of grayling fishing on the upper upper Severn. 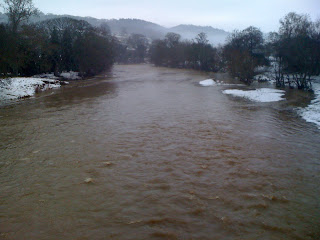 But as you can see from the picture it was far from grayling conditions, over an hours drive and it was unfishable!! Luckily half an hour back in the direction I came from and it’s my usual upper Severn haunt so a quick stop to check it out and run a float through was in order. But I suffered the same fate as before! 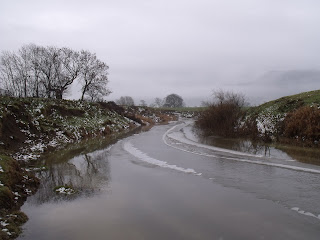 Both sides of the river were completely frozen and just a small channel in the middle for me to fish. I spent just over an hour in a few different spots before admitting defeat and retired to the car for some tea.

A return to the river Dee was inevitable and I had my head firmly set on a big Pike! I headed out a lot later than usual and upon arrive at my live bait catching section of the Dee I was greeted by a hoard of anglers! I drove down but every single peg was taken! With only a small supply of dead baits I didn’t really want to target my chosen area of the Dee without the magic of a livey!! So I decided to take a trip down to the mere but this was also unfishable, the whole mere was completely frozen over and I felt I would be wasting my time even if I tried. I had no other choice but to head to the area of the Dee I was going to fish anyway but with the deadbaits. 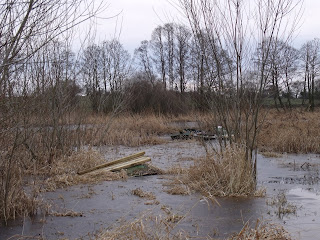 An in flood frozen mere!!

An hour later I was sat in my swim on the Dee and had two rods cast out towards a sunken snag which had collected a large amount of floating debris. Watch the video below to see the results


I had no confidence all day because things just weren’t going the way I wanted it to but I managed to catch one. You might have been able to hear a machinery noise stopping in video and that was a farmer on his tractor who had seen the commotion of me landing the fish and came over for a look. He was nice enough to take a snap for me. 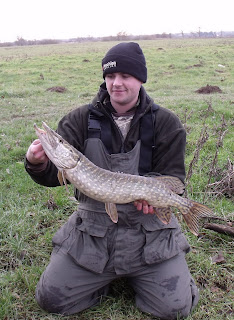 I stuck it out fishing the same swim for a little longer before a move back to the live bait section I had originally started. Upon arrival at the venue as expected most anglers had left because they can’t handle fishing into dusk. As I was fishing away I was approached by another angler and we started talking about how it had been fishing today. Apparently not one Pike had been caught and the Dace were not showing. He was right about the Dace because I failed to catch any! But it was nice to know that all the anglers in the same area failed to catch a Pike and I had one under my belt. 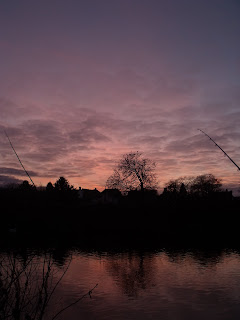 Quiver tipping into dusk, perfect way to end the session

I had Day booked off work because the weekend before I had spent it helping my cousin plaster board his ceiling and I had a number of late nights throughout the week so I really was ready to switch off and get out fishing.

So the fishing! Same plan as before quick stop for live baits then move on!! I arrived just after 7 and was relieved to find an empty car park with only one other angler upstream. Feeder rod was set up and I was soon enough supplying the Dee with a constant rain of maggots. Unfortunately the river really was ripping through and it was up about four foot because of the recent snow falls. I went upstream to speak with the guy fishing and he confirmed that nothing at all was showing, he was stick float fishing for dace and he hadn’t had a bite in 2 hours.

My next plan of action then was a few hours on deadbaits! 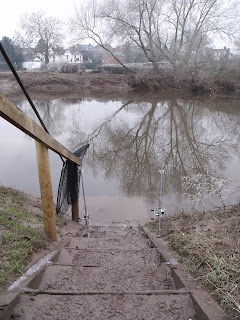 Messy business on the Dee, my gear was caked in mud!

The night before I made a trip to Sainsbury and got some fresh mackerel and herring. Both really smelly baits and I was hoping the scent trail in the murky depths might entice a take! I spent a couple of hours there before my mind starting going into overdrive, I just knew I was wasting my time and I was soon set on heading back to the mere. The 20lb Pike would have to wait and catching any Pike was the mission. 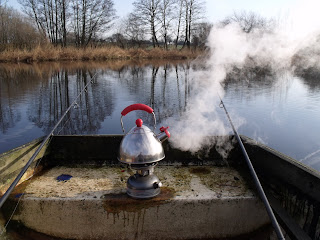 Rods out on the mere and an afternoon on the boat, First brew of the day

This was my first session on the mere this year and I always forget just how much I enjoy it down there, peace and quiet, no other anglers and the chance of a few double figure Pike.

My favourite area of the mere is the boat yard for the Pike but today I just couldn’t produce a run on the deadbaits! The next area to try would be wooded area
I tried everything during the course of the day! Dead baits nailed to the bottom, popped up baits, wobbled a few dead baits, and even tried a suspended dead bait! 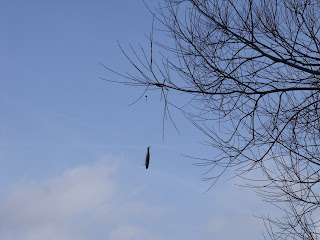 (Yes I did managed to get it all out of the tree, the beauty of using the boat)

The day had almost come to an end so all that was left to try was a little lure I’ve nicknamed the jack destroyer! Because it never fails to bag me fish. Only problem is that’s all it does catch is the little jacks, but it does save me from a blank! So with the last 40 minutes of day light and I managed to bag 3 jack Pike all from the boat yard 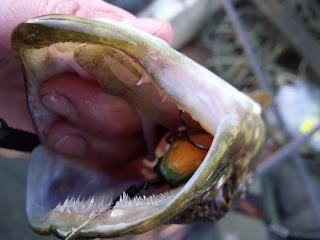 The jack destroyer in deep!! They loves it!!

I plugged away until the last flicker of light but was happy with my result even though non of the big girls showed to the deads. 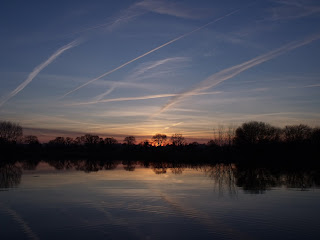 Nothing beats standing in boat throwing a lure around with the sun setting.

That now brings you fully up to date.

Like I said at the start of this, my aim now before spring is going to be a 20lb Pike! If I manage this I will then set my sights onto Chub. I’ve got a few big Pike venues in mind so I’m really looking forward to the next few weeks. Mainly because I will get to join a few of my fishing companions who are mad as hatters! So even if I blank the day will still be enjoyable. 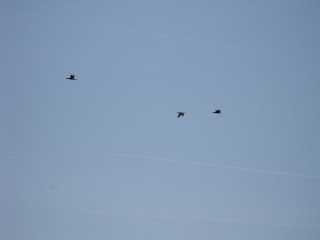 Cormorants over the mere!! Lock and load!
Posted by Bruce at 00:37 No comments: