"Blast from the past"

Fishing Sywell Reservoir was the reason id booked my Friday off from work and I was planning to get down there for the weekend, but with sywell being closed, me and Steve were left with bait and an empty weekend but no venue to fish I said id sort Steve out with a guest ticket and we will jump on my syndicate mere (I secretly wanted to do this anyway rather than sywell because I have unfinished business with the little tincas on there).
I went down the mere around 2pm on the Friday onto the peg I usually fish and got all my gear setup, rods clipped up and baited up but I was off the mere again by 5pm to sort something out. With rods clipped up already it was just a matter of casting rods out and putting little bit of fresh bait out 10pm and I made my way across the mere with the sun just setting, I put some fresh bait out over the markers which I had left in the boat.
Bait I put out was a few handfuls of casters and maggots on each marker, I didn’t put to much in because before I left id put out half a bucket of ewe nuts covered in molasses evenly over the 3 markers as well as handful of corn and handful of party blend.
Rigs for the first night was 10mm solar pop up with pva bag casters, day glow maggots with pva bag casters and I decide to change a corn rig and I made up a double pop up caster rig with a pva bag of caster. 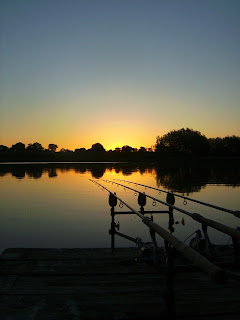 Sunset on mere
darkness fell and I was left hoping to be rudely awoken by a screaming reel, but instead I was rudely awoken by steve ringing me lol 3.30am and I boated across the lake to meet steve In the car park. After hauling a stupid amount of gear into the boat and plonking steve in one of the favoured pegs on the mere I went about putting some more bait out and getting my head down again. 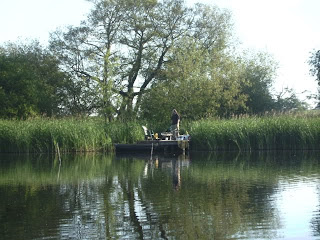 Steve in his swim
Dawn rose and up until 12am I couldn’t even by a bite, I think by this time steve had already lost a tinca but I was still to get a run. I decided to cream up and enjoy the sun when I had a piss baller on the right hand rod, I got sun cream all over it before bumping the fish not long after doing it. This happened 3 times in the space of 2 hours and it wasn’t until id realised I had done the knotless not the wrong way around (what you get for drinking whilst your making rigs up the night before) that I knew the reason for me bumping the fish off, grrr I thought but at least I knew the reason.
I spent the rest of the afternoon chin waggin with steve over the phone and in person, cooking burgers on steves stove because my bloody stove ran outa petrol and caught 2 pike on a little perch shad. 6pm and I was back on the rods waiting for a fish. 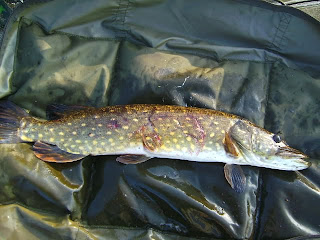 Scared Pike
With getting up so early for steve and a mixture of boiling hot sun I wasn’t feeling to good and got my head down by 9pm hoping for a wake up during the night with a nasty fish on the end, instead I forced my self out of bed after waking up at 4am and put more fresh bait in with a recast.
By 5am the sun was creeping up and the mist was dancing on the surface, I had been back and to to the rods with drop backs from roach on my double caster rig before finally connecting with one which looked around the 1lb mark, really pleased with my first roach off the mere I put him in the net for a picture later on.
5.30am and I was wake but tucked up in the fart sack just watching for rolling fish when my right hand rod roared off, I knew this one was a tench not only because it took a boilie but because it was fightingKnowing how the 6lb fish fought a few weeks early I knew this fish was a lot bigger because I just couldn’t get its head, I decided to grit my teeth and continue to inch it to the surface as it headed closer but closer to the pads.
its head broke the surface and I thought “aghh its not that big” then it rolled and I seen its shoulders “holy shit” it was a really big tench, praying to the lord above I snatched the first opportunity I had to get him in the net and he was in Lifting him out the water it was an 8 I could tell by the weight of it, I unhooked him and put him back in the net letting out a wwawaahhho00oo0o00o into the mist knowing my mission was complete.
I franticly tried getting hold of steve but he was away with the fairies. I couldn’t wait any longer and I put her on the wheel of fortune¡!!!!.. 8lb6oz!!I jumped in the boat and boated down towards steve with the pressure off my shoulders that I had now achieved my goal I was able to take in the surroundings of how gorgeous the mere is this time off the morning, I drifted through the mist and into steves swim to find him flat out in the bag lol I told stevey the good news and I boated both of us back up the mere to my swim and to take some shots of this gorgeous fish 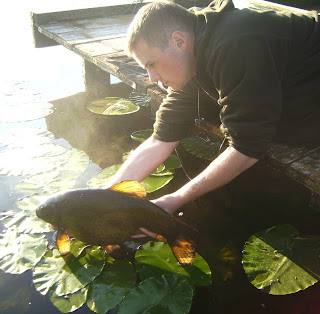 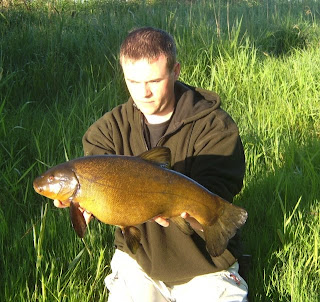 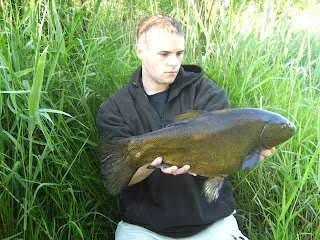 Back in the water and time for a brew to celebrate
Posted by Bruce at 08:49 2 comments: